No winner yet between Trump, Biden; both confident as states count votes 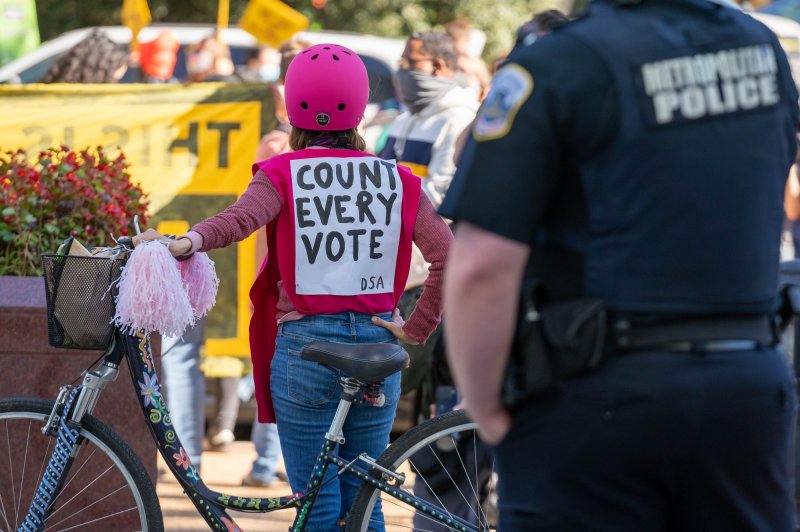 Biden has a slight advantage in the national popular vote, leading Trump by about 2 million votes.

There are still millions of votes left to count in the key battleground states of Georgia, North Carolina, Pennsylvania and Michigan. Some of those are expected to come from Democratic-leaning cities and counties like Pittsburgh, Detroit and Atlanta.

The slow process of counting ballots, especially early vote and mail ballots, was expected to shift the margins in Biden’s favor. Pennsylvania may not report large chunks of its results for days because of an abnormally large number of mail-in ballots driven by the COVID-19 pandemic.

“We are confident in our math. We are viewing some of these races as math equations,” he said.

Stepien cited tight races in Arizona and Pennsylvania, which he predicted Trump would win.

“Late arriving votes cast closest to election day are the ones being counted now [in Arizona],” he said, predicting that a majority of them would be for Trump.

“I want to share with all of you that Joe Biden is on track to win this election and he will be the next president of the United States,” she said at a briefing, predicting the former vice president would win his native state of Pennsylvania.

“We see 1.4 million outstanding ballots that will be counted over the coming days, most of them projected to be from Democratic-heavy areas and mail-in vote,” she added.

“We are going to accurately count every single ballot,” she told reporters in Harrisburg.

Pennsylvania Gov. Tom Wolf said about 3 million mail ballots were received and they are being counted. He warned that a final result might not be available Wednesday.

“The most important thing is that we have accurate results .. even if that takes a little longer than we’re used to,” he said.

Overnight, both candidates spoke about the state of the race. Trump attempted to claim victory, although no news outlet has declared him the winner.

“We were getting ready for a big celebration. We were winning everything, and all of a sudden it was just called off,” he said early Wednesday, adding that he wants courts to step in and stop the counting.

Biden encouraged patience and said he’s in a good position to win.

“It’s not my place or Donald Trump’s place to declare the winner of this election. It’s the voters’ place,” he tweeted.

“We knew this was going to go long, but who knew we were going to go into maybe tomorrow morning or even longer. But look, we feel good about where we are. We really do.”

“We won’t rest until everyone’s vote is counted,” he added in another tweet.

Biden will give an address sometime on Wednesday, his campaign manager said.

Four of Nebraska’s five electoral votes have also been called for Trump and Biden is leading to take the other.

President Donald Trump gestures to his guests after making a statement to the nation as his supporters look on in the East Room of the White House in Washington, D.C. early on Wednesday. Photo by Chris Kleponis/UPI | License Photo
admin2020-11-04T17:33:50+00:00November 4th, 2020|