Legendary Miami Dolphins coach Don Shula’s (C) health had declined in recent years before he died Monday morning at his home in Miami Beach, Fla. Photo courtesy of the Miami Dolphins
MIAMI, May 4 (UPI) — Don Shula, the winningest coach in NFL history, died Monday. He was 90.

The Miami Dolphins announced that Shula “passed away peacefully” Monday morning at his home in Miami Beach. Fla.

Shula is survived by his wife, Mary Anne, daughters Donna, Sharon and Anne, sons Dave and Mike, and 16 grandchildren. His cause of death was not disclosed.

“Today is a sad day,” Dolphins president Tom Garfinkel said in a statement. “Coach Shula was the rare man who exemplified true greatness in every aspect of his life. He will be so missed by so many but his legacy of character and excellence will endure.”

Shula was an NFL head coach for 33 years. He spent 26 seasons with Miami, and his 1972 Dolphins remain the only perfect team in NFL history with a 14-0 regular season record and a Super Bowl title.

He also led the Dolphins to a Super Bowl victory the next season. The Dolphins were 257-133-2 under Shula.

Shula began his NFL coaching career as the defensive backs coach for the Detroit Lions in 1960. He was hired as the Baltimore Colts’ head coach in 1963 at age 33, when he became the youngest coach in league history.

Shula led the Colts to a 71-23-4 record in seven seasons before he was hired to coach the Dolphins in 1970.

“I was saddened to hear this morning of the passing of the greatest coach in NFL history,” former Dolphins wide receiver Mark Clayton tweeted. “My coach for 10 years. Coach Shula took a chance on me and the rest is history. My condolences to the family. Best coach on earth, best coach in heaven. RIP Coach.”

“The game has lost one of the greats today, but we have all lost a truly incredible man,” Pro Football Hall of Fame president David Baker said.

“Hall of Fame coach Don Shula served as an ambassador for this great game for more than half a century. His legendary feats on the gridiron led him to a record 347 wins to become the winningest coach in NFL history and allowed him to lead the 1972 Dolphins to the only perfect season in NFL history.

“Coach Shula was a man who truly loved the game and I have often been moved by the deep respect and affection he was always afforded by the men who played for him.

“The entire Pro Football Hall of Fame family mourns the passing of coach Shula. Our thoughts and prayers are with his wife Mary Anne and their entire family. The Hall of Fame flag will fly at half-staff and we will forever keep his legacy alive to serve as inspiration to future generations.”

Shula had just two seasons with a losing record during his tenure with the Dolphins. The four-time Coach of the Year was inducted into the Pro Football Hall of Fame in 1997. 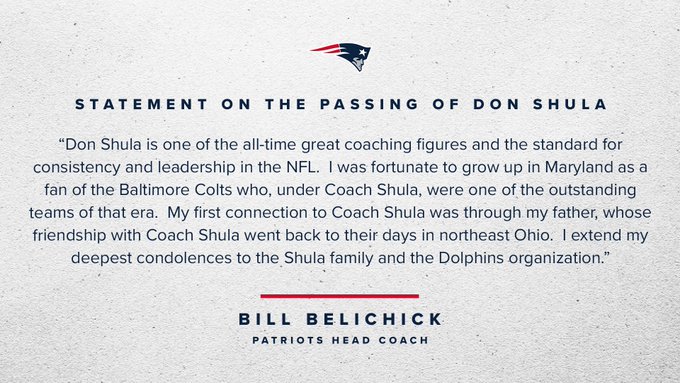 1,103 people are talking about this

“Don Shula was the patriarch of the Miami Dolphins for 50 years,” the Dolphins said. “He brought the winning edge to our franchise and put the Dolphins and the city of Miami in the national sports scene.

Shula was born Jan. 4, 1930, in Grand River, Ohio. He played football at John Carroll University in Cleveland before he spent seven seasons as an NFL defensive back. Shula had 21 interceptions in seven seasons. He played for the Cleveland Browns, Baltimore Colts and Washington Redskins.

Shula’s health had declined in recent years. He was hospitalized in 2016 due to fluid retention and sleep apnea. He used a wheelchair when he made public appearances.

Sad day for the NFL and sports 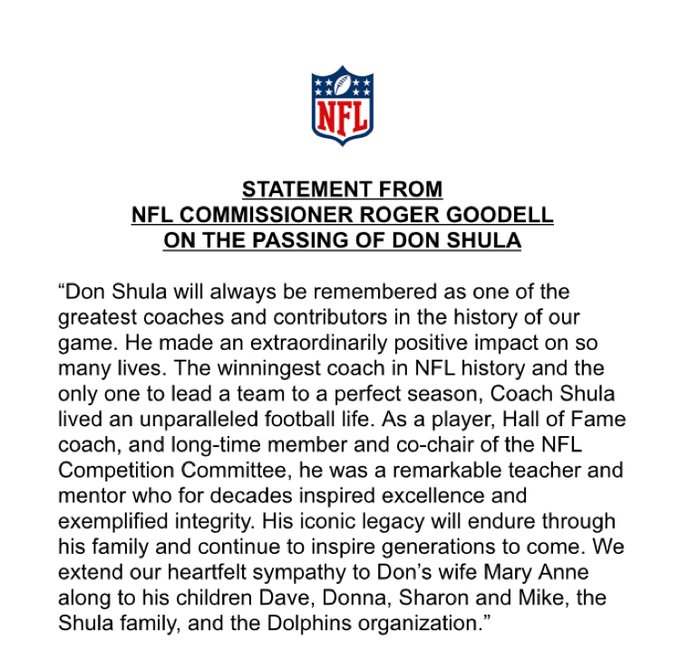 248 people are talking about this

“He was a tough, hard-nosed coach who demanded excellence,” said Richmond Webb, a star offensive lineman for six of Shula’s Dolphins teams. “We had very disciplined teams. That’s a lot of the reason we had success when I was there.”

Former coach Don Shula presents the inaugural Don Shula NFL Coach of the Year Award to Ray Seals of Houston’s Madison High School during a press conference in Dallas, Texas on February 4, 2011. The winningest coach of NFL history died on May 4 at the age of 90. Photo by Ian Halperin/UPI | License Photo