Dempsey, who famously converted a 63-yard field goal attempt in November 1970 despite being born without toes on his right foot and fingers on his right hand, contracted the virus last month during an outbreak at the Lambeth House senior living center in New Orleans, according to NOLA.com. Dempsey had been battling Alzheimer’s disease and dementia.

“Our thoughts and prayers are extended to Carlene and the entire Dempsey family on the passing of their dear Tom,” Saints owner Gayle Benson said in a statement Sunday. “The New Orleans Saints family is deeply saddened and heartbroken at this most difficult time.

“Tom’s life spoke directly to the power of the human spirit and exemplified his resolute determination to not allow setbacks to impede following his dreams and aspirations. He exemplified the same fight and fortitude in recent years as he battled valiantly against illnesses but never wavered and kept his trademark sense of humor. He holds a special place in the hearts and minds of the Saints family.” 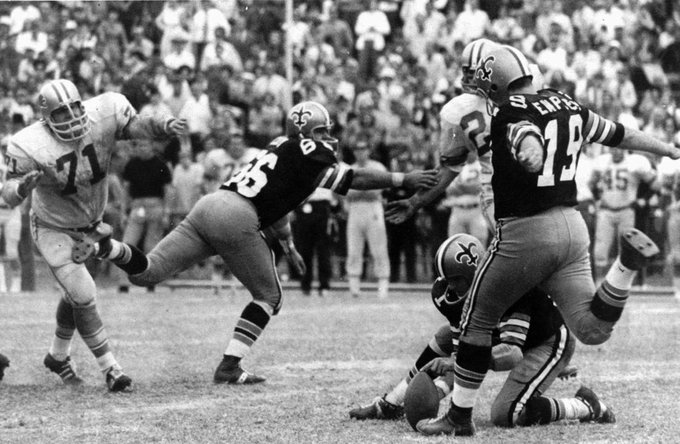 1,426 people are talking about this

Dempsey made the iconic 63-yard field goal at Tulane Stadium in New Orleans as the Saints came from behind to beat the Detroit Lions 19-17 in the closing seconds. It was the longest kick in NFL history for 28 years until former Denver Broncos kicker Jason Elam equaled the record in 1998. Fellow Broncos kicker Matt Prater broke the record with a 64-yard boot in 2013.

Dempsey, who signed with the Saints after going undrafted in 1969, also played for the Philadelphia Eagles, Los Angeles Rams, Buffalo Bills and Houston Oilers before retiring in 1979. He was a Pro Bowl selection and first-team All-Pro choice in his rookie campaign with the Saints.

Dempsey was inducted into the Saints’ Hall of Fame in 1989. In his career, he made 61.6 percent of his field goals and 89.4 percent of his extra points.