Ryan Newman’s inverted car is hit by Corey LaJoie (32) as Kevin Harvick (4) tries to avoid contact during the 62nd annual Daytona 500 on Monday at Daytona International Speedway in Daytona Beach, Fla. Photo by Edwin Locke/UPI | License Photo
Feb. 18 (UPI) — NASCAR driver Ryan Newman is awake and speaking with family and doctors a day after being involved in a devastating crash on the final lap of the Daytona 500.Roush Fenway Racing issued a statement Tuesday on the condition of its driver, less than 24 hours after Newman sustained serious injuries as a result of the crash that occurred at the end of Monday night’s “Great American Race.” Doctors indicated that his injuries were not considered life-threatening.

“Ryan and his family have expressed their appreciation for the concern and heartfelt messages from across the country,” the statement said. “They are grateful for the unwavering support of the NASCAR community and beyond. We will continue to provide information as it becomes available.”

Newman, 42, was the race leader on the final lap of the Daytona 500 when he was bumped by Ryan Blaney just before the finish line, sending him into the outside wall and into an airborne spin while upside down.

Newman’s car flipped several times and was sliding on its side when Corey LaJoie, traveling at full speed, slammed into it. His car crossed the finish line on its roof and in ninth place before coming to a stop.

Here is the final lap of the Daytona 500 in which Ryan Newman’s car was flipped at the line.

We will continue to keep you updated on his status as we learn more. 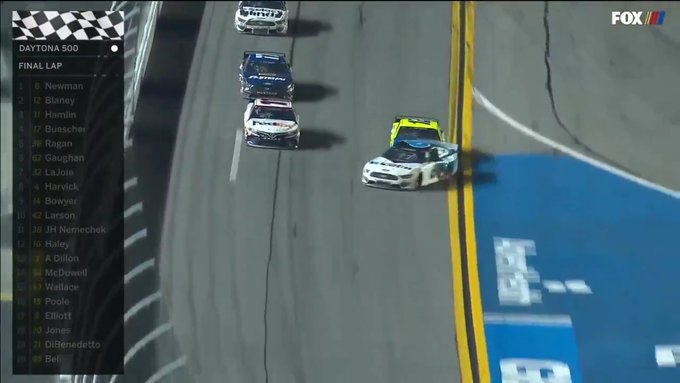 Newman was removed from the car and taken to the hospital by an ambulance. As of Tuesday, he remains hospitalized at Halifax Medical Center.

There hasn’t been a fatality in NASCAR’s Cup Series since Dale Earnhardt died in a crash on the last lap of the 2001 Daytona 500.

Denny Hamlin went on to win Monday’s race by a 0.014-second margin, the second-closest finish in Daytona 500 history. It marked his third career victory at Daytona.