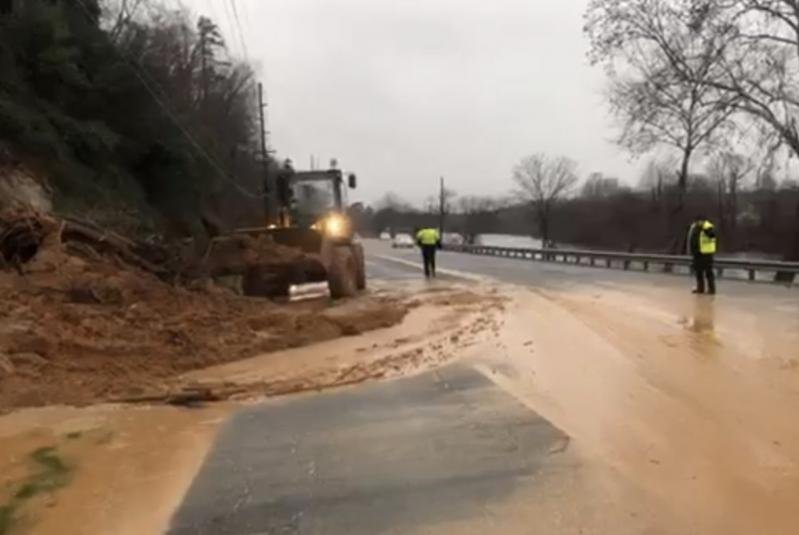 This week’s storms cause record rainfall in some cities throughout the region. Photo courtesy of the Danville (Va.) Police Department
Feb. 8 (UPI) — A burst of heavy rainfall and severe weather rocked the South from Wednesday through Friday morning, killing at least five people and leaving over 250,000 others without power from Florida to Virginia.

The first storm-related fatality came out of Demopolis, Ala., as a tornado struck, according to the National Weather Service Storm Prediction Center. Kevin McKinney, the Marengo County emergency management director, identified the victim as Anita Rembert. According to McKinney, the woman was in one of two mobile homes destroyed by the twister. Her husband, Curtis, was also injured, while her daughter and two grandchildren were also in the homes.

A survey team from the NWS confirmed that an EF1 tornado touched down in the area, with winds reaching up to 110 mph. The tornado was on the ground for less than a mile and a half.

Four other fatalities from the severe outbreak came from weather-related car crashes. A driver in South Carolina was killed by a falling tree near Fort Mill, Highway Patrol Master Trooper Gary Miller said. Another driver, Terry Fisher, 73, was killed in his pickup truck after the vehicle hydroplaned down a 25-foot embankment into a creek, according to the North Carolina State Highway Patrol.

In Tennessee, two deaths and six injuries stemmed from a pair of crashes. The first crash killed one and injured two others on Thursday in Knoxville when a car hydroplaned into a truck, according to a police news release. The other accident claimed the life of Brooke Sampson, a 36-year-old teacher, while injuring four others. The cause for that crash is still under investigation, according to Tennessee Highway Patrol spokesman Lt. Bill Miller.

The storms rumbled through Florida during Thursday night with wind gusts of 76 mph reported at Naval Air Station Jacksonville. High winds from the storms toppled a crane onto Interstate 275 near Pinellas Park, Florida, just north of St. Petersburg.

In Seminole, one person was injured and several others were trapped when a tree fell onto a home. Wind gusts over 60 mph were reported amid a tornado warning in the area. There has been no confirmed tornado at this time, but survey crews from the National Weather Service will examine the damage in the coming days and determine whether or not the destruction was caused by a tornado. 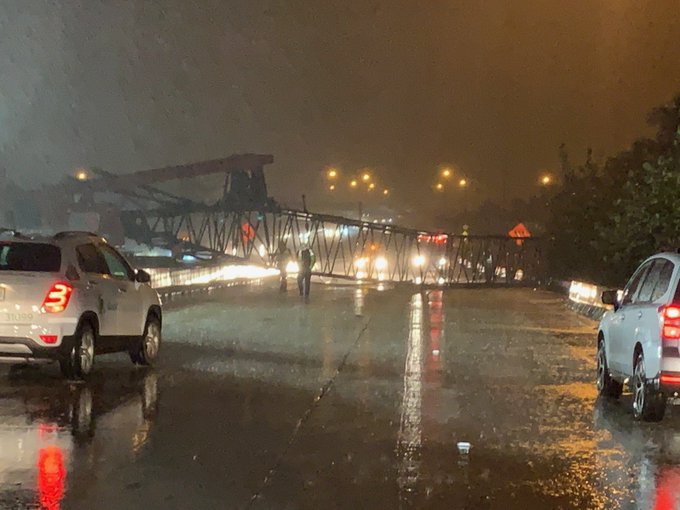 44 people are talking about this

Ground stops were in effect for a time at airports in Orlando, Tampa and Miami, Fla., as the thunderstorms moved through these cities on Thursday night.

Earlier Thursday, people throughout the Florida Panhandle, Georgia, Virginia, South Carolina and North Carolina found themselves under the worry of tornado watches, including before the clock even struck noon.

A ‘particularly dangerous situation’ tornado warning was enacted in Charlotte, N.C. Shortly after 10 a.m.the Charlotte Douglas International Airport ushered people to shelters and ordered others to stay away from windows.

The Federal Aviation Administration said that the airfield may have been damaged as a result of the severe storms and the airport remained closed through the early afternoon. Over 1,000 flights were delayed and an additional 470 canceled at Charlotte Douglas International Airport by Thursday night.

The Charlotte Fire Department had to come to the rescue of a group of people trapped in the basement of a doctor’s office late Thursday morning after they had taken shelter from the storms. The door had been wedged shut with no doorknob or handle on the inside.

“It started out very scary, mainly because I don’t think anyone wants to go down into a basement during a storm because of what it could potentially mean,” Veronica Zalewa, one of the people trapped in the basement, told AccuWeather. “And then I don’t know for anybody else, but for myself it didn’t really become more of an inconvenience, it kind of just became sort of a comical situation almost.”

Torrential downpours accompanied the severe storms, leading to widespread flooding across the region. 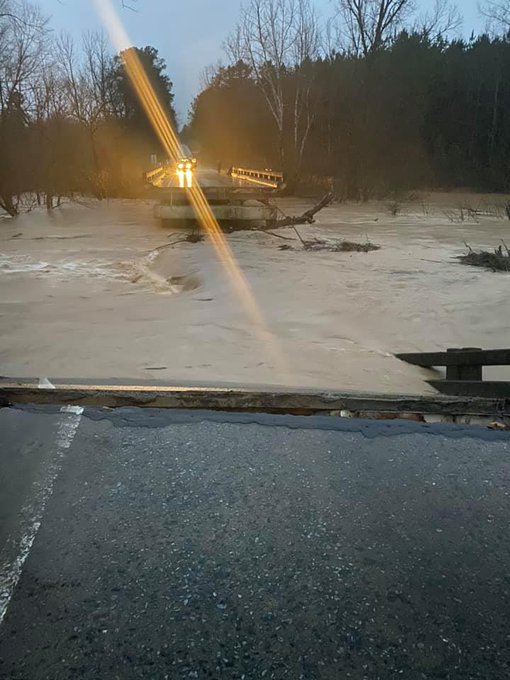 35 people are talking about this

In Grover, N.C., there was a report over Twitter that a bridge on Lavender Road had collapsed. The image with the tweet showed a bridge washed away into the floodwaters of Buffalo Creek.

A possible tornado was recorded at 10:24 a.m. in Spartanburg, S.C., according to multiple spotters. The SPC also added reports of damage to a local Walmart at Dorman Center.

In a ‘particularly dangerous situation’ tornado warning issued for portions of Cabarrus, central Mecklenburg and southeastern Gaston counties in North Carolina, the NWS confirmed that a dangerous tornado had touched down 7 miles east of Gastonia at 11:21 a.m.

All told, eight tornadoes were reported on Thursday and Thursday night, according to the SPC.

Traffic hazards and concerns congested areas of Virginia, such as Danville, located just north of the North Carolina border. According to the Danville Police Department, mudslides from the heavy rainfall detoured traffic on Memorial Drive.

A state of emergency was declared in Virginia on Thursday evening in response to the flooding across the southwestern corner of the state.

Virginia Gov. Ralph Northam said flooding has displaced more than 500 residents around the town of Richland while washing away roads in the southwest portion of the state.

At least 11 cities across the Southeast broke their daily rainfall record for Feb. 6, according to the NWS.

Greensboro, N.C.; Athens, Ga.; Birmingham, Ala.; and Knoxville, Tenn.; were other cities that broke their Feb. 6 daily rainfall records.

Reports of tornadoes, hail and frightening winds had roared across the Deep South on Wednesday night and early Thursday morning.

A construction area in New Orleans was the site of the outbreak’s first injury reports, as scaffolding over a pedestrian sidewalk collapsed amid high winds. According to the New Orleans Emergency Medical Services, one individual was transported to the hospital with minor injuries.

The first tornado report came from a spotter in Simpson County in Mississippi. According to the NWS Storm Prediction Center, trees were downed and structural damage was reported in the Martinville area. Minutes later, a storm chaser had visual confirmation of the possible tornado, and more reports of downed trees and power lines were confirmed on Highway 540.

“I heard a roaring sound, kinda like a freight train coming, like when it’s breaking down to a slow speed, and well by the time I got to the door to look, it was already blowing really hard,” J.C. Powell, a Simpson County resident, told WLBT.com. “[The tornado] just took everything. It took the pickup bed out of my neighbor’s pickup truck and brought it over to my house and that’s what knocked my window out on my car… Wasn’t nothing I could do.”

Possible tornadoes leading to downed and snapped trees, structural damage and blown-off roofs were also reported in the counties of Smith, Yazoo, Holmes, Leake and Jasper, Miss., through the afternoon and evening.

on Collier Ferry Road in Carthage was destroyed. 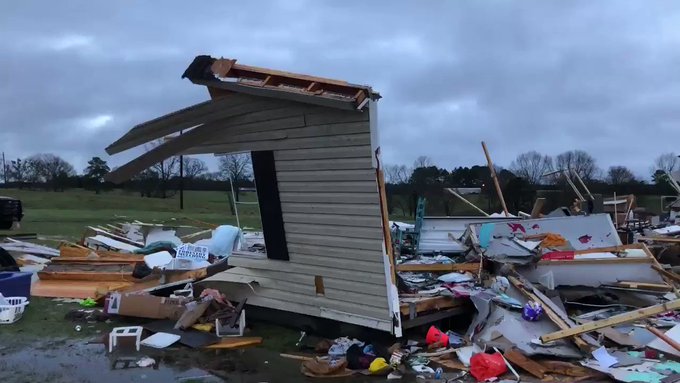 18 people are talking about this

In Clarke County, located in eastern Mississippi, a reported tornado in Enterprise overturned an 18-wheeler and shut down numerous major roadways. The driver of that 18-wheeler was initially trapped in his vehicle. Emergency Director Eddie Ivy reported that there were no injuries, according to WTOK.com.

In Dunwoody, Ga., a tree fell on a vehicle traveling on Interstate-285, temporarily shutting down the eastbound lanes. No injuries were reported.

The storm system that spawned the severe weather was also responsible for bringing record snowfall to parts of the central United States before pummeling the Northeast on Friday.

“Behind this storm system, drier conditions have settled over the South through the weekend,” AccuWeather meteorologist Renee Duff said.

“However, AccuWeather meteorologists are actively monitoring the potential for flooding downpours and feisty thunderstorms to return to the region for several days during the early to middle part of next week,” she added.