By
Darryl Coote
Oct. 11 (UPI) — The 21-year-old man accused of killing 22 people at a West Texas Walmart has pleaded not guilty.

Patrick Crusius, indicted last month by a grand jury on charges of capital murder, entered his plea Thursday during his arraignment hearing at the El Pas County Courthouse.

Crusius was arrested on Aug. 3 close to the Walmart in El Paso where he is accused of opening fire on customers earlier that day.

Police said he drove some 650 miles from his Dallas suburb residence to the store, which is near the U.S. southern border, with the intention to target Mexicans, according to an affidavit.

Family members of the deceased and people injured in the attack were in attendance as Crusius entered his plea.

Crusius’ attorneys Joe Spencer and Mark Stevens said his not guilty plea is part of their strategy to avoid the death penalty, which prosecutors are seeking.

Following the hearing, El Paso Mayor Dee Margo published a brief statement, stating that today’s hearing was the first step in a long process toward justice.

“Our community will not be able to fully heal until justice is served and he pays for the hate he brought into our city,” he said. “However, we cannot allow this trial to provide him notoriety or foster additional hate. There is overwhelming evidence proving his guilt. I want him prosecuted to the full extent of the law.” 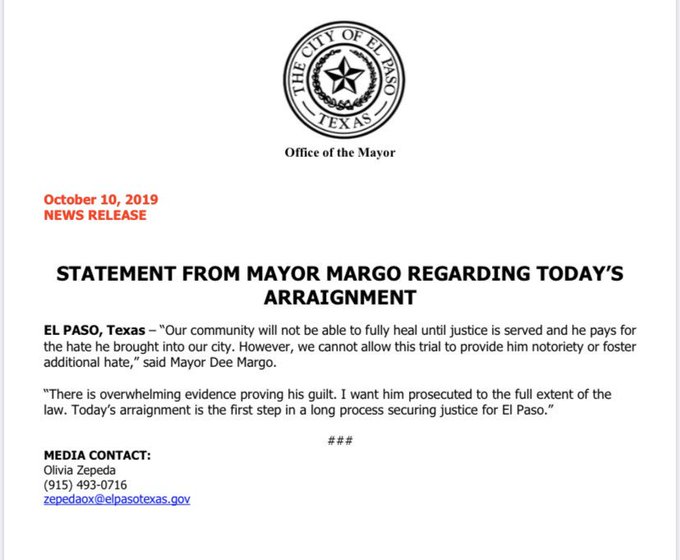