As shutdown ends, workers have little faith about future 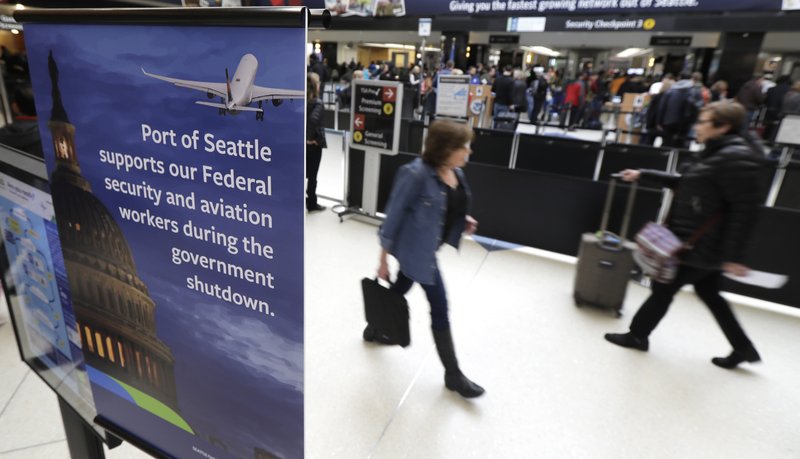 A sign near a TSA security checkpoint states the Port of Seattle’s support for federal government workers, Friday, Jan. 25, 2019, in Seattle. Yielding to mounting pressure and growing disruption, President Donald Trump and congressional leaders on Friday reached a short-term deal to reopen the government for three weeks while negotiations continue over the president’s demands for money to build his long-promised wall at the U.S.-Mexico border. (AP Photo/Ted S. Warren)

Federal workers who have gone a month without getting paid during the longest government shutdown in U.S. history expressed relief Friday that a deal had been reached to end the impasse, but are worried they’ll be in the same spot in a few weeks.

Ivan Tauler and his wife spent an exhausting three weeks calling, researching and haggling to get relief from government agencies, schools, banks and utility companies to scrape by during the shutdown that caused him to be furloughed from his cartographer job at the National Oceanic and Atmospheric Administration in West Virginia.

For Tauler, the end of the shutdown was far from a cause for celebration. The deal announced Friday by President Donald Trump only reopens the government for three weeks while negotiations continue over the president’s demands for money to build his long-promised border wall.

“We won’t be spending money like we normally would,” said Melinda Tauler. “We will be more cautious about our finances than normal until we know that the government is not going to be closing every couple of weeks.”

Tauler was one of about 800,000 furloughed federal workers thrust into weeks of uncertainty and financial hardship — leading many to take out loans, apply for unemployment, do temporary jobs and launch online campaigns asking for donations.

The end of the 35-day impasse came on what would have been the second payday with no checks for federal workers. The deal includes back pay federal workers who have gone without paychecks, with Trump vowing that they will get paid very soon.

Alecia Lane, a management analyst with the U.S. Food and Drug Administration from Laurel, Maryland, said she’s excited she’ll get a paycheck soon but said the only luxury spending she might do right away is taking her two sons, 12 and 8, to the movie theater.

Lane was among hundreds of federal workers who launched GoFundMe campaigns to get financial help during the shutdown. She needed help to pay her own bills and send money to help her autistic brother and mother who live in Kentucky. She said it was embarrassing to have to make that public plea.

“I’m saving every dime. I never want to be in this position again,” said Lane, a U.S Navy veteran. “I’m worried that we’ll be right back in this situation in three weeks. He (Trump) wants that border wall. To be honest: I was shocked that they even reached this deal.”

Lane scoffed at President Trump’s assertion in his Friday announcement that federal employees agreed with him and weren’t complaining.

“Who was he talking to?” Lane said. “Everyone was complaining, let’s be real.”

Single parent Leisyka Parrott, a Bureau of Land Management employee in Arcata, California, was driving with her son Friday when she heard a radio news broadcast about the deal to reopen the federal government for three weeks. Her cellphone immediately began buzzing with congratulatory text messages from friends, who know she has been furloughed from her job since Dec. 21.

Rebecca Maclean, a housing program specialist for the U.S. Department of Housing and Urban Development in Pittsburgh whose furlough began Dec. 21, was washing dishes and listening to NPR when the news broke of a deal to temporarily end the shutdown. She isn’t celebrating quite yet.

“Until (Trump) puts ink to paper, I’m not going to check my bank balance,” she said.

She and her husband have been grateful for the outpouring of support from neighbors. Some dropped off food. Twice, somebody anonymously dropped off grocery store gift cards on their front porch.

The Taulers were approved for food stamps and arranged for free breakfasts and lunches from the schools for their four children, and Ivan Tauler had already submitted his unemployment application.

He said the family is left with hard feelings for politicians and a deep desire to keep more money in savings.

“This seems to be a recurring theme so we’re definitely going to be prepared for it,” Tauler said.